The Nevy brothers bought the Fornovo Villa prior to the birth of Florence in 1923. During WW II Linda and Robert lived there with Catarena, Henry Nevy’s second wife, and their son Robert. Robert was an American citizen caught there during the war so he hid there from the Germans in the attic. One time he heard two German soldiers drinking his wine and almost yelled at them. Linda had gold-plated flatware which she lowered into the well on a rope to hide it from the Germans. After the war the Nevy Brothers sold the Villa. Linda’s Husband, Vicini told them they would get nothing for it. When we visited there briefly with Ralph and Erminia it was a house for priests. 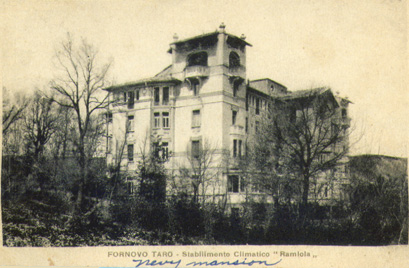 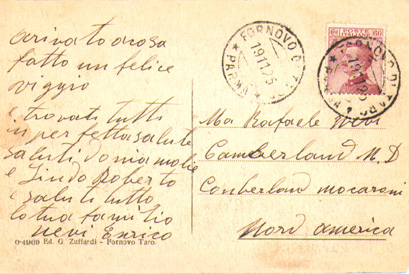 A recent visit to the mansion by Jeanne, Sandra, Joan and Sue

On our June-July 2000 trip to Italy, Jeanne, Sandra, Joan and myself (Sue had already left for America) visited the old Nevy mansion in Fornovo. It lay hidden up in some hills and was very tricky to find, due to the complexity of the country roads there. A sign in front of the place indicated that it was now a rest home for senior citizens. In the old postcard we’d seen, the mansion appeared to be standing in the open on a barren hill-but now very tall, thick clusters of trees grew all over the grounds and surrounded the mansion. They were so thick, we couldn’t even see the entire structure from the road.

Lovely wrought-iron gates stood open and welcoming as we drove in and up the winding, tree-shaded drive. The mansion itself was very neatly restored and painted in a rich salmon color that we’d seen a lot driving through Italy. It rose up majestically beside the drive with all sorts of bay windows, decorative stone sills, carved side trim and archways. Beautiful! There was a tiny parking lot along side of the two entrances in back. The main entrance where guests could check in was, according to mom, the kitchen entrance that everyone used back in the twenties.

Inside, it was air conditioned and comfortable. A huge antique vase of flowers sat on a polished wooden table before a wall mirror. Sandra spoke to the woman behind the window and explained who we were and why we had come. She and her staff were amazed and very hospitable, inviting us to have a look around. They turned us loose without so much as someone to accompany or follow us. We were very impressed! The ground floor had a long hallway with lots of huge, elegant parlors. The biggest one in the center had grand French doors leading out to an expansive stone, semi-circular veranda-which overlooked the sun dappled lawns and pond in front. The view was very peaceful and aesthetic with only the din of locust humming in the background and butterflies flitting around aimlessly. The rest of that hallway had partitioned dining rooms already set and waiting for the evening meal.

Halfway down the hall a staircase rose up several stories and we could look up the stairwell and see each layer-much like an old English manor. We ascended to the second and third floors, seeing lots of rooms belonging to occupants. Some of them were sitting in chairs reading, some had orderlies with them, and a lot of them saw us and gave us warm smiles and waves. We wondered if any of them could remember when this house belonged to the Nevys and if they knew Catarina-Henry’s second wife who lived there.

There was another wing which we decided not to go down, because it only looked like more of the same. There were once open-air breezeways with stone arches leading to the other wing, but now they were glassed in and carpeted.

As I walked through, I imagined what it must have looked like in the old days-the rooms bigger and not divided into little apartments. I tried to picture my mother at age four, running and up and down the halls screaming and laughing with her cousin Robert. Could one smell the luscious aromas coming from Catarina’s kitchen on the ground floor from the archways? I also wondered what it must have looked and felt like when there were jack-booted Nazis roaming around with guns during the takeover in WWII.

Finally, we tiptoed down into the basement and saw that Mass was being said in a little chapel there. After that, we’d seen our fill and it was time to go.

Driving out past old grounds-keeping quarters and gardens, we marveled at how in just fifteen years the Nevy brothers went from their tiny hovel in Castagna to this rambling mansion. How many European immigrants, carving out a living in America from scratch, could boast that sort of success story? It made us even more proud of our legacy and roots, and I thought to myself how blessed the Nevy’s must have felt owning this place. After World War II, the Nevy mansion was sold out of the family to a famous doctor in the region. It then became a home for priests (see Bill’s Sojourn story) and finally a rest home.