By Barbara Ann Orsinger Adolfson
As a child, I live in post-war Europe. To me, this has always been an accepted part of my life, but only recently have I come to realize what an uncommon experience this was. I am genetically ½ Italian, ¼ German and ¼ Irish. Something I knew when I lived in Naples, Italy with my family in the mid-50’s. But, I don’t think I could even begin to understand all the ramifications of who I was and the entire world that I had innocently entered.

We arrived in our home in Naples after traveling by 1st class on an American ocean liner. It was 1956. I found Naples exciting. We stayed at a 1st class hotel with a swimming pool on the roof. Salami sandwiches would magically appear poolside at lunchtime. Butter for our “Continental” breakfast was rolled into a charming shell shape. I met the King of Nigeria (!), or so I was told in the elevator. I do remember a large jolly African that exclaimed, “Hello kiddies!” to us in a British accent. And I also saw poverty outside our hotel windows. Something I had never seen before.

We flew to Germany to pick up the VW microbus we had ordered. I loved the beauty of Germany and the seductiveness of feather beds, charming old guesthouses and real cuckoo birds calling during the night. But, even as a child, I noticed a few things. Germans were enraptured with my dark hair. They wanted to touch it.

We passed towns that had had death camps. My father made sure we heard that. But what had really happened there? I was 9 and probably not understanding anything. I did know that Germany and Italy were allies in World War II. Later, when we drove into Italy, something else happened. Ruins. Destruction. People living in dire poverty. The difference between post war Germany and Italy was incredibly obvious.

But what really hit me was when some locals once pulled my Italian mother aside and asked why she was traveling with a German, my father. I didn’t make judgments. I didn’t ask questions. My Mother was obviously Italian, my Father looked very German, but he was also half Irish. It was a fact and I made no judgments.

Years later, my husband, son, and myself were visiting my Nonnie and Nonno in Cumberland, Maryland. On Sunday, as a sign of respect, I went to mass at Saint Peter and Paul’s with my Grandparents and my son, Erik. My husband, a Protestant, stayed home at Fayette Street. At the noon meal that day, my Nonno asked my husband why he did not go to church with us. Bill replied it was because he was a Congregationalist. My Nonno exclaimed, “What! A Communist?”

Years later, when I returned to my Nonno’s hometown in Italy, I learned something about Northern Italy and Fascism. After we had lunch with our relatives at their restaurant, and visited my Nonno’s deserted hometown, we were driven up a very steep and questionable road until we came into a clearing with a small chapel. We had the requisite tour and heard all about the festivities held there each year during harvest time.

Off to the side, was a simple stone memorial. We were with Anerio and Alfio Spagnoli. Anerio was particularly emotional when he talked about the resistance fighters who died on that mountain. Both Italians and Russians. Russians who we always thought of as being Communists! Good men defending liberty. And it was the same in my Nonnie’s hometown. And is so around the world, including Germany, which has recently welcomed their brothers from the East. 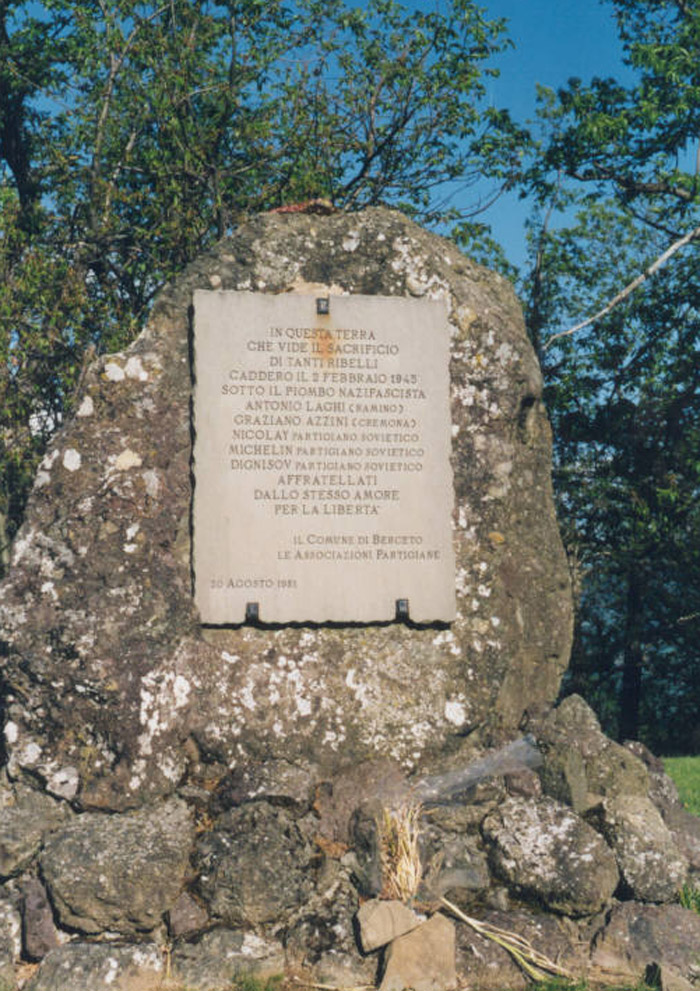